“It’s only now, as midnight approaches, that I realize how many songs they didn’t play. I’m barely able to breathe let alone move or walk. I may never listen to guitar music again.” 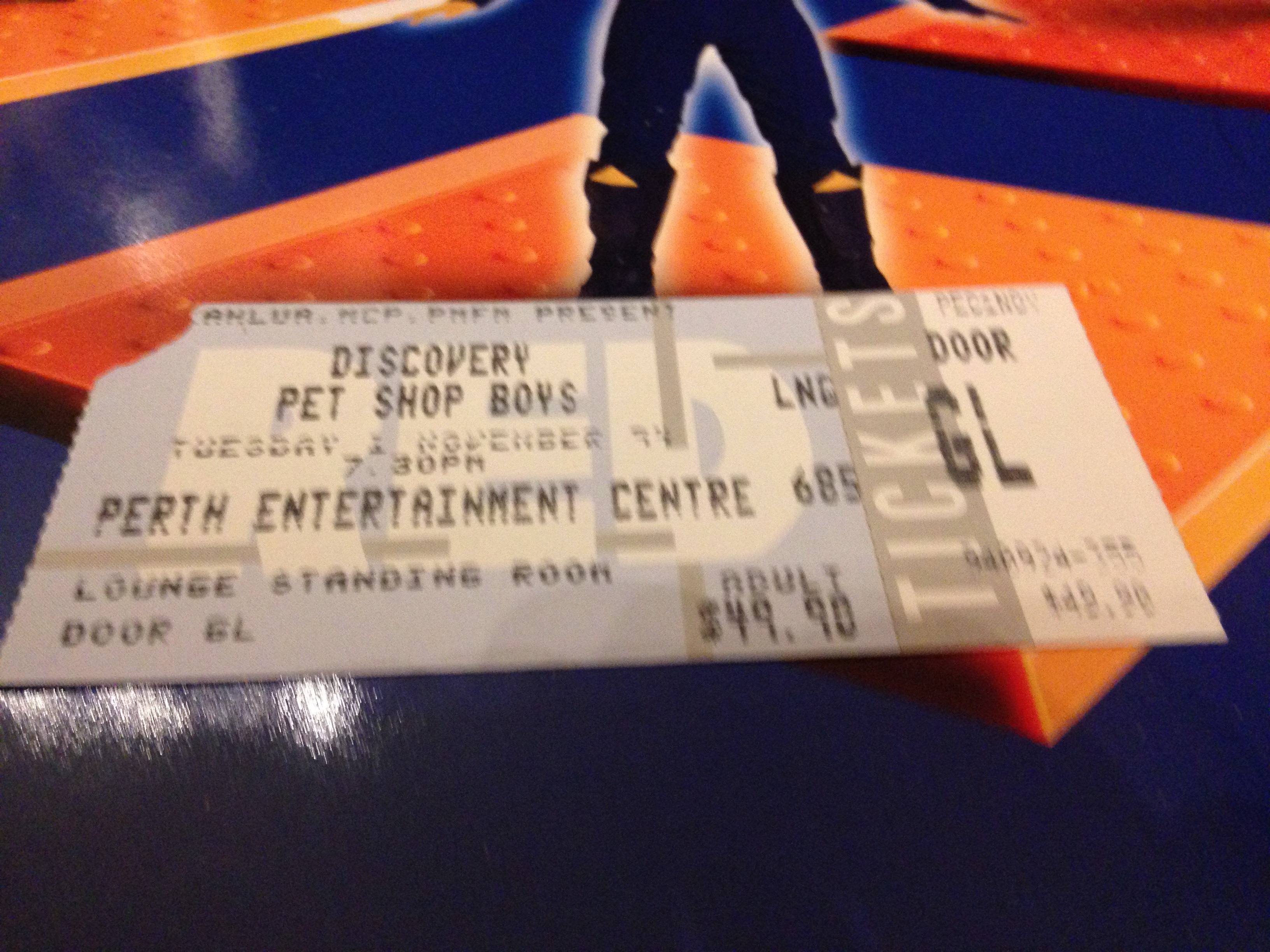 This gig marked my introduction into the most joyous and life-affirming experience that I have ever known: seeing one of my all-time favourite bands live. As such, it was a pretty important day.

In 1994 I was a much happier girl than I’d been in 1993. I’d started my BA at the University of Western Australia and loved it. My days were spent studying Linguistics, Latin and German, and listening to the increasingly astounding amounts of amazing music that was coming out of the UK. In July of ’94, I had another lightning bolt moment where I discovered a new band to add to my list of all-time favourites – but I’ll talk about that more in my next post.

When it comes to all-time favourites, the bands or artists that you live or die for, that you clutch so closely to your heart that they become an indelible part of it, the Pet Shop Boys were my first. I came across them in 1988 when “It’s a sin” and “What have I done to deserve this?” were played on the music TV shows I watched in Singapore, where my family lived at the time. My mum bought “Actually” on cassette, and one day I borrowed it, and never gave it back. This was the ultimate lightning bolt – the discovery that music was more than just something pleasant to have on in the background while you did your homework. Music mattered. The songs on that album, suffused with melancholy, and a yearning for unreachable things, connected with me in a way I’d never experienced before, and in a way only music truly can. Six years later, and I finally had my chance to see them live. To say I was excited would be an understatement.

One of many significant aspects of this gig was that it was the first gig I went to completely on my own, which is by far my preferred way. I am selfish when it comes to gigs: I want to be able to stand where I want, to scream and shout and dance without risking disapproval or mockery from friends. I have always found it hard to understand why some people find it impossible to go to gigs on their own – especially now, when you can scroll through Facebook or read a book on your Kindle app while you are waiting, making standing around on your own a much less awkward experience than it was in the 90s. And once your favourite band is onstage, it’s just you and them, and nothing else matters. It makes me sad to think that some people miss out on such amazing experiences just because none of their friends like the same music they do.

After queueing for an hour or so outside the Entertainment Centre, I experienced for the first time in my life that rush of sprinting to the barrier upon being let inside the venue.  “I wanted to be right at the very front, but when I made it there, there were already three or four rows of people. It didn’t matter too much really.” As this was my first proper experience of a pop concert, everything was new and interesting, and I made a note of all the extraneous goings-on: the “acid jazz muzak” that played before the support band, the support’s music which was “pleasant enough but completely lacking in style, inspiration or originality”,  the activities of the crew setting up the stage who  “mopped the floor and set up mikes and keyboards and zipped up ladders to check the lights.” It’s kind of endearing to look back at a time when such gig mundanities were still so new and exciting.

“It must have been around 9pm when the lights finally dimmed again, screams pierced the air and two cone-hatted figures appear silhouetted on the huge screen. Neil is singing “Tonight is Forever”  but it’s not long before the bewigged duo appear and dive into “I wouldn’t normally do this kind of thing”. The video to the song played on the massive screen, rather undressed dancers begin flinging themselves about and I was shocked to discover that I was screaming too!”

That joyous abandon you feel when your favourite band is on stage, being amazing, singing the songs you love, entered my life that night and it was like nothing I’d ever experienced before: “…it’s when they play “Where the streets have no name” that the insane wonderfulness of it all really takes hold of me and I begin screaming like a lunatic. At least after a lifetime of never screaming it certainly felt that way.”

The hits and recent album tracks rattled by: “Always on my mind”, “Domino Dancing”, the luscious “To Speak is a Sin” and “One in a million” which mutated into “Mr Vain”  for a few hilarious moments, then Neil removes his wig with a dramatic flourish and disappears.”

Then it was time for some solo turns from the boys. “So Chris, also unwigged, takes centre stage and accompanied by a pair of muscularly thrusting dancers he deadpans about Versace and Ar-ar-armani as this is “Paninaro”. He takes the piss out of the audience’s restrained dancing style and wanders from one side of the stage to the other, to massive cheers from everyone. Then he disappears and Neil is back to joke about MTV unplugged and play an acoustic version of “Rent”. Suddenly a thousand people are chanting “You dress me up, I’m your puppet”. It is of course beautiful and breathtaking and so is the semi-acoustic version of “To Face The Truth”, which Chris returns for.”

They played so many songs I loved, it seems I could hardly catch my breath with the sheer delight of it all. “They play the best, the only version of  “Girls and Boys” and I’ll never be able to listen to Blur again. “Can you forgive her?” is storming, “Liberation” is joyous. “Take my hand” sings Neil, and a million hands stretch towards him, cruelly ignored.” Even the songs I wasn’t so keen on were woven from sheer jubilation that night. ““So hard” was never one of my favourites but when they play it, it is godlike… “Absolutely Fabulous” is one I’d been vaguely hoping they wouldn’t play, but like everything tonight, it’s wonderful beyond measure. “

Hearing the songs I did love most of all was basically a religious experience. “West end girls” was “divine… but even that does not scale the heights of “King’s Cross”, always one of my favourite songs and they didn’t have to play it, it’s only an album track. But they did and I screamed even though no one else was as it was the slow thoughtful one and they probably didn’t recognize it at first as it’s not one of the hits. It was moving, divine.” And when it came to my first ever Pet Shop Boys song, I was overwhelmed. ““It’s a sin”, the very first Pet Shop Boys song I ever heard, has Neil in red glittering Papal regalia, and the backing singer dressed as a nun and singing “I will survive”. And me singing unreservedly and screaming beyond insanity at the unbelievable significance of the occasion.”

That was the end of the set, but it was not long before they returned cone-hatted for “Go West”, their recent massive hit. “It’s a major sing/screamalong, of course, particularly spectacular in the last chorus when their hats suddenly shine with descending rows of light.” The boys left the stage but returned soon for a second encore. “Neil introduces everyone and when he gets to Chris and himself the audience nearly spontaneously combusts. “I love you!” shriek several boys.” It’s worth noting that I was probably not the only one in the crowd that night who had long felt the pain of being unable to see beloved bands live. My noting of the fervent crowd responses I describe here could just be prompted by it being the first time I’d been in such a crowd, but it could also indicate how much more it means to a Perth audience than eg a London one, when a band we loved made the lengthy trek to our isolated shores.

“The last song is “Being Boring”, again never one of my favourites but at this point I am delighted beyond measure to hear it and basically, it’s wonderful. Then, alas, it is time to leave, and also time to discover that walking has become a very difficult endeavour.” 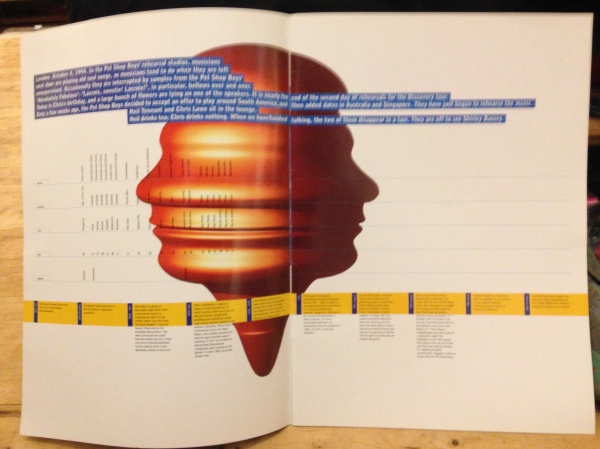 And so I stumbled out of the Entertainment Centre to find my Dad waiting to drive me home, where I attempted to record everything I’d just experienced for the first time.

“Right now, as 2am approaches, I feel like every band I’ve liked since the Pet Shop Boys has been pointless. I only ever needed the Pet Shop Boys all along,” I concluded the entry full of hyperactive scribblings. “Now I have seen them. I never will again, but life could be worse. It’s things like this that make life worthwhile.”

Here’s a handy link to all my writing about the Pet Shop Boys!