My first gig as a Proper Londoner, living and working in the city I’d dreamed of for years, was to see the flamboyantly orchestral My Life Story. But it was the support band I really wanted to see that might, a band I thought, for a few glorious weeks, were going to become my New Fave Band Ever: Orlando.

So much had occurred between my last gig – the Manics in Kentish Town on December 16th – and this gig on Valentines Day 1997 at ULU. Despairing at ever booting me from her spare room, my aunt had had a quiet word with a colleague at the hospital where she worked – the Royal Brompton – and I was summoned, on Friday, 17th January 1997, to meet the imposing and important Outpatients Manager. I was deemed acceptable as a new member of staff, and duly started my first ever job the following Monday as a part time clinic receptionist. In some ways, things were so much easier in the 90s.

Like many hospitals of the time – less many now – the Brompton offered accomodation to its staff, so it was on the 27th of January 1997 that I moved into poky room 403 of the Nurses’ Home on Chelsea Square. I am happy to report that this building is still a nurses’ (and general staff) home, and still offering subsidised NHS accomodation even in privatised 2018.

So there I was – a young woman with an income and a room in Chelsea, in 1997, almost 22, ready to stride out into London and experience all the amazing bands it had to offer. I grabbed this opportunity with both hands, and what it led to changed me forever. It was the best year of my life, no contest.

And here we were on Valentine’s Day, not that I cared about that. I am the kind of person who will bore you at length, if allowed on Feb 14th, at how St Valentine is the patron saint of plague, fainting, epilepsy and beekeeping as well as romantic couples. On this particular Plague Day, all I cared about was the chance to see the band who almost were my next lightning bolt: Orlando, supporting My Life Story at ULU.

Like many bands I ended up loving – the Manics and Suede, for example – Orlando first caught my attention before I ever heard any of their songs. Living in Australia and mainlining the UK music press, there were many bands I knew by sight, by the band members’ names, by their personality in interviews, before their music had the slightest glimpse of radio airplay down under. In October 1996, still in a dimly lit bedroom in Perth, I wrote this in my diary:

“They affirm every corner of the dimly-let bedroom life without pointlessly glorifying it, they say “why can’t you have Take That AND Oasis?” without the slightest sniff of irony, they are a duo, and they are beautiful… The reference points given over and over are the Manics, Suede and the Pet Shop Boys… In short, Orlando are very, very exciting. The major problem is the fact that I haven’t heard any of their songs yet.”

A week later I had exciting news:

“I finally figured out how to hear those Real Audio song samples on their website and they’re faaaab. “Nature’s Hated” is particularly amazing, soaring, dynamically melancholy, an anthem for deviant youth, 22 seconds of this and I knew all the hype was beyond justified. “Just For A Second” is rather like the Pet Shop Boys with an admitted Robbie Williams impersonator singing and is therefore great as well.”

Suffice it to say, I was really excited about Orlando. I thought they might just become my new favourite band in the world. So I cared little, that Friday afternoon, when one of my new work colleagues asked me if I had plans for the evening and looked at me like I was the scariest of freaks when I told her I was off to a gig on my own. I strode excitedly out to ULU for my first non-Manics gig in London.

Naturally I saved my travelcard from this gig too.

So excited was I, in fact, that unlike my last three gig reports, when I got home and commenced my excited scribble in my diary, there was no preamble about finding my way to the venue or comment on the venue itself. I went straight to the point.

“Orlando! GODS!!! “Nature’s Hated”: single of the year, no contest. Oh my bloody goodness me.”

I collapsed into sleep at this point, it seems, but continued in a similar vein the following morning.

“Tim, a skinny squirrel in a sensible suit and occasionally the most divine euphoric grin I have ever seen. Dickon, gaspworthily beautiful, peroxide and eyeliner and Holy Bible style army gear.”

But the tunes? Were they good?

“Every single moment of pop genius from the past 30 years colliding to create this one scream worthy duo.”

Okay, that’s more like it! What songs did they play?

“Love! I couldn’t decide which one to be in love with, I think this will have to be a rare experience in my fan life time of Not Having A Fave. By which of course I mean BOTH are my fave!”

But what of the songs?

“It was hard to tear your eyes from Tim, pogoing and spinning and flinging his black fringe about in the most gloriously un-manly way possible… Still I was inclined to spend much of the time staring at Dickon, hoping he might perhaps cast a glance in my direction or indeed at the audience in general, but he never did, as far as I saw.”

Did they in fact sing any songs whatsoever?

“Just to see a band looking so brilliant was a thrill, despite the visual intrusion of their decidedly non-popstar backing band.”

Eventually, it seems I emerged from this reverie and remembered that songs had actually been involved in the previous night’s visual entertainment.

“You know you’re talking of pop genius when you spend pages on the way the band looks before you even get to the tunes. The tunes, then, were wonderful. Very. I’d been obsesssively listening to their two singles to make sure I knew all the words to the songs, but they only played one from those CDs, the closing euphoric “Just For A Second”. There were about six songs that I hadn’t heard before, all fabulous, though due to their unfamiliarity I can’t really tell any of them apart at the moment. I was surprised at times how rock’n’roll, almost punky they sometimes sounded. They were in general a lot more raucous than I’d expected.”

But when they played “Nature’s Hated”, the song that had so excited me when listening to the 22 second sample back in Perth, I struggled for words.

“I think now it’s about time for me to find myself lost for words as I attempt to describe “Nature’s Hated”, the next single, the fourth song in. THIS IS THE SONG!!! the crystallisation of everything the universe ever intended for pop music, I was stung, I was struck, I was torn to pieces and inspired to a lifetime of religious devotion, will that do?”

It’s safe to say I was pretty much gone at this point.

“I am seriously and incurably in love with Orlando now. Tim and Dickon are POP STARS and they will save the world from a century of tedium, meaning more to people than any band since those Manic blokes and fending off marriage proposals from legions of weeping twelve year olds.”

Sadly, this never did happen. But wouldn’t the world be a better place if it had?

Anyway. The evening did not end when Orlando’s set finished, for there was My Life Story to come. I’d heard a few of their tunes and quite enjoyed them, but would probably not have been enticed to see them live if Orlando hadn’t also been on the bill. My entire review of My Life Story’s set runs thus:

“After Orlando I was quite prepared not to like My Life Story, mostly ‘cos of the gaggle of pissed Orlando-hating 14 year olds down the front who reminded me of everything I’d hated about being 14 (ie other 14 year olds). But rather inconveniently My Life Story turned out to be utterly fab. What with their string section fiddling wildly and dramatically in the background, the parping preposterousness of the brass and lead singer Jake alternatively done up in red and white PVC, executing more high kicks than Eternal on speed and more Jesus poses than the man himself (who, let’s face it, only did it once anyway), it was a highly entertaining show. Particularly good were the showers of glitter at the end, and Jake taking the piss out of the pissed 14 year olds and sacking the balloon supplier.”

So it was, all in all, a pretty great night. However, my heart truly belonged to Orlando now.

“I haven’t been this truly excited and thrilled by pop music for years. Oh god I love them!”

So it pains me to report that this was the one and only Orlando gig I ever went to. They had been due to do a headlining tour in the spring, but that had been cancelled by the time I saw them at ULU. The “Nature’s Hated” single was postponed for so long that I started to forget just why it had seemed so earth-shatteringly brilliant. I spotted Tim at a few record fairs over the next few months, but was too shy to go up to him and say hi. Orlando did eventually tour again in October, but I was out of the country when their London gigs happened. Their album “Passive Soul” was released around the same time, and while it was just as awe-inspiringly wonderful as I had expected, my obsessive pop soul had wandered on to other bands by this time. And not long after that, they split up.

Still, it was a glorious thing, even for such a short time, to have a band in my life that was so wonderful, so inspiring, such a charge of light and stars to my ragged, anxious brain. I would love to visit a parallel universe in which they fulfilled their promise, and became hugely successful, releasing many astounding albums and rousing the adoration of millions. But at least I have “Passive Soul”, and the memories of that one perfect gig, and of how thrilling it all was, just for a second. 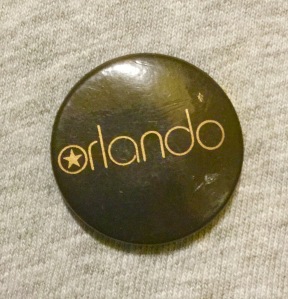 Tagged as: my life story, orlando