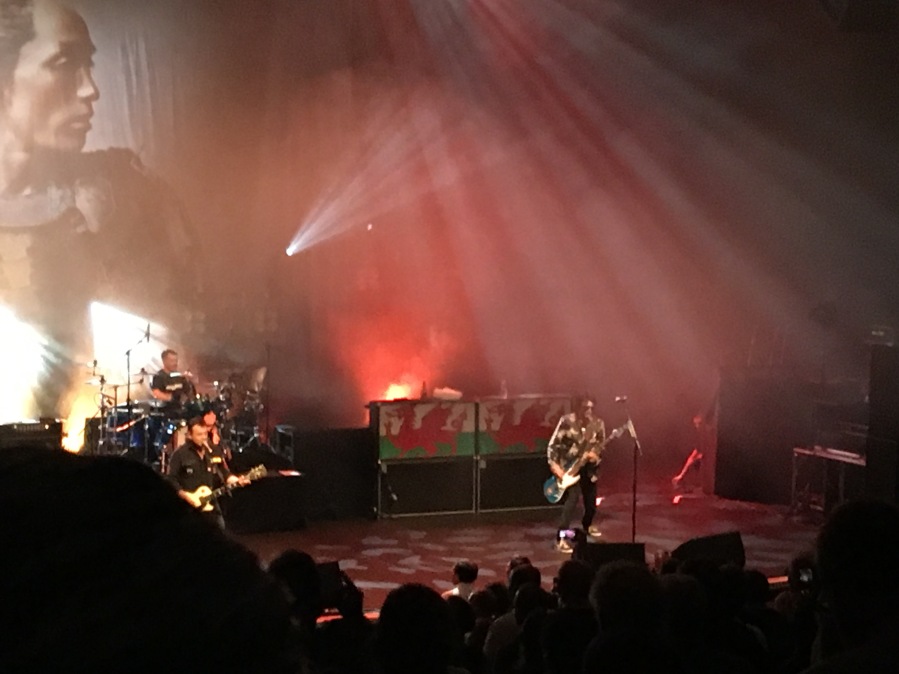 I had planned to go to three Manics gigs on their arena tour in April and May, but I missed them all due to illness. So I was very determined to make it to this one, especially as support was going to come from another favourite artist of mine, the Anchoress. This was in fact my 33rd time seeing the Manics, and my 3rd time seeing the Anchoress, and I guess there’s a reason why 3 is my favourite number, because it was a truly stunning evening from start to finish.

It was very hot and stifling within the Royal Festival Hall that evening. My seat was half way back in the rear stalls, quite a bit further away than I like to be. As I took my seat a bit after 7pm, I looked around the crowd and pondered the likelihood of a communal sprint to the front once the Manics came on. This gig formed a part of the Meltdown festival, curated this year by Robert Smith. I’ve only been to one Meltdown gig before – Suede in 2002 – and my diary entry for that gig reports such a frontwards surge that I was able to upgrade my position from a seat near the back to a spot right in front of the stage. However, this June night in 2018, I determined that the crowd were all a bit too middle aged and knackered (myself included) for such activity to occur again.

The Anchoress – aka Catherine Anne Davies – took to the stage a little after 7.30pm. Her debut album “Confessions of a Romance Novelist” is a glorious concoction of beauty, spite and great pop hooks. I’ve seen her live twice before, but those were largely acoustic, small venue affairs. This promised to be something even more exciting – a full band show at the spectacular Royal Festival Hall and with the prospect of a duet or two with the Manics – and she did not disappoint.

At previous Anchoress gigs I’ve been to, Catherine has usually been half hidden behind a keyboard, and being such a brilliant performer I always hoped she’d be able to break free from the instrument and strut her pop star stuff like the icon in making she is. Here, this finally came true. While the first tune carried on as before, with Catherine behind the keyboard for a darkly brooding rendition of “Long Year”, she then leapt up to sing storming versions of “One For Sorrow” and “What Goes Around” unencumbered by the instrument. Although the stage was very dark and there was not much of a spotlight on her, it was still clear to see that she is A Star.

I was particularly excited to hear a new song, “Show Your Face”, which had a fantastic 80s-style synth sound. This and the various snippets she’s been posting on social media from recording sessions are giving me high hopes for an amazing second album. Best of all for me tonight, this was the first time I’d heard a full band version of my favourite song of hers, the gloriously catchy yet bitterweet “You And Only You”, which at previous gigs was performed as a piano ballad.

Catherine’s set finished with a beautifully touching rendition of the title track of “Confessions Of A Romance Novelist”, before she departed with a hint that she might be back later. And then I found myself in that rare, glorious fragment of space and time: half an hour from seeing the Manics live. It was perhaps a little unusual to spend this time casually roaming the Royal Festival Hall foyer and taking advantage of the free jugs of water on offer, instead of finding oneself jostling for pace amongst the excitable throng down the front. But it was all pleasantly civilised.

I’ve seen the Manics far and away more times than any other band in my life. I was gutted to miss out on the recent arena gigs I’d planned to go to, but reading some fan reports had given me the impression that all may not be well in Manics land just now. The band had doubled in size with the addition of three extra musicians, suggesting that Nicky, James and Sean might be experiencing a bit of fatigue. They had also notably failed to sell out many of the dates on the arena tour. And most sadly of all, Nicky Wire’s mum passed away earlier in the month, leading to his absence from recent festival shows. So there was a little trepidation mixed in with my excitement as I waited for the band to come on.

I needn’t have worried. The lights went down, the stage was lit all in red, some twangy guitar music was serving as an intro, and then, as the band walked on stage, there was a sudden heightened intensity to the screams and cheers of the throng, and I knew, before I’d even seen him, that Nicky was there. And then as the band launched into a rousing and joyous “International Blue”, suddenly this middle aged throng defied the impediments of age and dodgy hips, and leapt up to sprint down to be as close as possible to our boys. I made it to nearly the front of the rear stalls and ended up with a fantastic view, with space to sway and leap as the songs demanded.

It has to be said that MSP live are an odd beast at the moment. From my vantage point I could ignore the left hand side of the stage and just concentrate on the three Manics, as if nothing had changed since I first saw them in 1996. But the other side of the stage was a different band altogether – two extra guitarists and a keyboard player. Something about seeing the Manic Street Preachers perform as a six piece just feels wrong, and especially strange to see James not playing some of the band’s classic riffs such as the opening to “No Surface All Feeling”. It’s hard to fathom the reason behind this new hefty line-up – whether it’s the consequence of a lack of confidence coming with encroaching age, or simply because the new material demands a fuller sound. Certainly, it was the newer songs that truly lit the night on fire here, while rawer, rockier classics like “Motown Junk” and “Slash’n’Burn”  felt comparatively laboured and clunky, weighed down by the extra musicians when they should rip through with punky energy.

However, all these gripes are pretty petty when confronted with the fact that the Manics are still an astounding live band. If you are looking for a back catalogue of stirring melancholia to leap and scream and sing along to, the Manics are truly unrivalled. From the soaring “Motorcycle Emptiness” to the bouncy “You Stole The Sun From My Heart” to the weary defiance of “Little Baby Nothing”, no other band has so many moments of sheer joy and power in their live set. Moments that make throwing your arms in the air as you holler “sorrow! sorrow! sorrow!” or “I love you all the same!” or “culture alienation boredom and despair!” seem like the most important in your life, the moments that every other moment is leading up to.

“Little Baby Nothing” here was upgraded with the addition of the Anchoress. I’m lucky enough to have seen the band perform this song with Kylie Minogue – who the song was originally written for – and while that was a great pop thrill, it’s the Anchoress to whom the song truly belongs now, even moreso than Traci Lords. Perhaps it’s knowing the Catherine is, like me, a huge fan of the Manics, and quite possibly, like me, spent many a bedroom hour hollering along to this song and imagining being able to perform it with the band (something I seriously doubt Kylie ever did, much as I love her) that makes this duet feel so completely perfect – that and, of course, Catherine’s powerful delivery of the song, in which you know she feels and lives every word of it just as much as we in the crowd do. This song was followed by “Dylan and Caitlin”, the gorgeous Manics/Anchoress duet from “Resistance is Futile”, and it’s safe to say that it’s going to be hard for me to feel any Manics gig is truly complete from now on if the Anchoress is not also there.

And what took me completely by surprise at this gig was that it was elevated to the ranks of my all-time greatest Manics gigging experiences not by the old, nostalgia-inducing favourites, but by the new songs. In particular, “Hold Me Like A Heaven” and “People Give In” were both monumental anthems of epic joy and melancholy. The former is both tender and strident, with “I hate the world more than I hate myself” sure to become one of the classics amongst Manics lyrics. But “People Give In” is truly phenomenal – a song that speaks as perfectly to me about my life now, at 43, as “From Despair To Where” spoke to me when I was 18. “People get tired, people get old, people break down…” After missing out on the arena tour due to a combination of being tired, old, and breaking down, it was beyond wonderful to me to now be in the presence of the band and to sing along with this song, and to be truly living its concluding line: “People stay strong.”

The Manics once articulated the alienation and despair of youth. Now they soundtrack the weary perplexity of middle age, of being “torn between the then and now”. I can only hope that in 25 years time they’ll be on that same stage, singing of the hopeful resignation that comes with old age.

One thought on “Manic Street Preachers and the Anchoress at the Royal Festival Hall, Tuesday, 19th of June, 2018”