A slightly rocky start to my first ever Reading. When would I ever learn that Moshpits And Me Don’t Mix?

My second ever festival came hard upon my first. But while V was a relatively new kid on the fest block, it was Reading that had caught my attention for years in the music press, right back to when I was a shoegaze-obsessed indie kid in Perth, in the early 90s. From my diary, as I was recovering from V97:

“This is, in a way, the Big One: the festival I have longed to attend ever since Ride nearly headlined it in ’92. A mere five years on, then, and I’m going to my first ever Reading. Hope I’m in slightly less pain by then.” 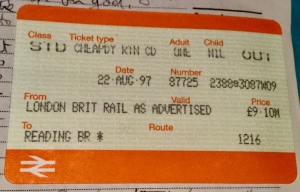 So on Friday the 22nd of August, sufficiently recovered from the previous weekend’s excesses, off I ventured to yet another new destination. “I left here at around 11.30, tube to Paddington, train to Reading, long walk to festival site. Long walk around fest site trying to figure out where to get in and where to get a wristband. But then I was in! My first ever Reading!”

I had a wander round and soon found my favourite place to hang out at the festival: the delightfully zeitgeisty tea room. “Everyone sat on curvy blue cushions drinking free herbal tea as the DJ pumped out bangin’ choons and a wall of TVs played endless episodes of the Flintstones. Strange fluorescent shapes and flashing coloured lights punctuated the dimly-lit atmosphere. It was very 90s.”

Eventually I had to leave the sanctuary of the tea disco and, at nearly 4pm, I saw Kenickie. “They certainly are amongst the wittiest pop stars in the world today, and impressively peroxided, eyeliner’d and glitter’d, but sadly lacking in anything particularly moving music wise.” Afterwards I made my way to the queue for Suede’s signing, but as it turns out, I probably should have just gone back for more tea. “The queue stretched from the signing tent, past several food stalls, into the Melody Maker tent, and right out the other side. After two and a half hours I had at least made it through the tent but still had, oh, at least 200 people in front of me. The queue seemed to be moving at about two feet per 15 minutes. I gave up and just went up close to have a look at Brett signing some bloke’s chest.”

I went off then to have dinner then, though I did not record for posterity what I chose, and then came back for another look at Suede just before they left the signing tent, prompting the crowd to clamour forward to catch one last glimpse. Unsigned photos were distributed, “exactly the same as the signed one sent out by the fanclub, except, well, not signed. I took two anyway, bought a fanzine from some girls I recognised from the “Filmstar” gig, and then went back towards the stage to sit down and read that whilst catching the remainder of James. Crowd-pleasing, but eminently unthrilling.”

However unthrilling James were, they were “a veritable explosion of inspiration in comparison to Cast”, who were on next. When it came to indie allegiances in the 90s, I had nailed my colours firmly to the androgynous, glitter-drenched, leopard print brandishing mast of bands such as the Manics and Suede, and found the oafish, blokish bands like Cast objectionable to the point of being a crime against music. However, they were the last band on before Suede, so I gamely tried to find a place in amongst their fans. “I grinned and bore it during the Castblokes’ mosh excesses. For a couple of songs it was almost enjoyable in a mindless sort of way. But when the crowdsurfing began and a few pairs of trainers were unsuccessfully ducked from, I’d had enough and made my way out of the crowd to a safer distance.”

Which prompted a bit of a rant in my diary. “The popularity of Cast amongst indieblokes is quite frankly astonishing. Their tunes are the most inane connect-the-dot compositions in the known universe. They ARE Boyzone with guitars. As for those bloated beerswilling boys punching the air at the dimwitted likes of “you gotta fly!” “you gotta live the dream!” etbloodyc, my thoughts can only be summed up by what I was hollering the following night, at the end of “You Love Us”: Die! die! die!” Blimey Scruffy. That escalated quickly.

Happily, Cast were soon gone, and I made my way towards the front again to wait for Suede, finding a position about six rows back. This was a mistake. “I thought I’d learnt how to handle moshpits. I was wrong. The first song was “She”, and we all put on our falsettos for the “ooh ooh”s. There was a bit of push and shove but nothing too frightening. But when the boys stormed into “Trash” utter terror ensued. I was nearly on the ground several times. I do not think I would have gotten back up. Feeling quite ill I began struggling my way out. Still singing along though.”

I found a bit of breathing space out to the left, on the Neil side of the crowd “but quite frankly too far away for that to matter. It takes me the rest of “Trash” and most of “Lazy” to feel human again. Then, wonderfully, they launch into “Animal Nitrate” and I’m capable of leaping about again.”  Now somewhat recovered, I was able to enjoy “By The Sea”, which was “beautiful as ever”, and “The Wild Ones”, one of my all-time faves. “It was somewhat divinely ragged, that supernatural falsetto out in force again.” I was also delighted to hear. “So Young”, “with Brett seemingly desirous of removing the drug reference, “let’s chase the dragon” somewhat unceremoniously replaced by “let’s get together”, at least ’til the last chorus”.

However, I was somewhat disappointed in myself to find myself so far back, and “for being such a lightweight in the mosh. Most annoyingly of all, I couldn’t help feeling that close to the front, it would have been an utterly classic gig, whereas from my vantage point, it was all a bit distant.”

Still I tried to make the best of it. I was very excited to hear some new songs that night, and was particularly taken by one whose title I didn’t catch. “It was lovely, all aching resonance, a lonely cry of “please come!” I can easily picture us all warbling frantically along to it come April ’98.” Or not – for the lonely cry was not “please come” but in fact “He’s Gone”, a track from their next album “Head Music”, which didn’t come out til May ’99. Another new song was “Implement, Yeah!”, featuring Justine out of Elastica, which eventually ended up as a B-side to “Electricity”, again not til 1999. “Justine shouted some verses at us, and Brett shouted “Implement Yeah!” It was a somewhat shouty tune, yes”.

They played “Saturday Night”, which was not one of my favourite Suede songs, but as ever, the live setting transformed it. “It is wonderful, those chords soaring through the field, Brett wandering along the ridiculously large space between crowd and stage.” It was during “New Generation” that I decided to brave the thick of the crowd again. “I thought forchristsake this is a band I’ve loved for centuries up there! and I’m this far away! and sufficiently indignant I began moving in and rejoined the throng a bit more.”

From this new, slightly closer position, the gig soared to new heights, with the ultimate highlight for me being “Picnic By The Motorway”, “somehow more violent and menacing than on the album, and yet about ten times more desperately sad. Unbelievable. Wonderful.” Then it was “Europe Is Our Playground” which was “only slightly less moving. That chorus surely must have resounded halfway across Europe as it is”. After these two slow, sombre tunes, it was  finally “time to thrash ourselves about once again” when they closed the main set with “Beautiful Ones”. “There can be few more demented ways to spend a Friday evening than leaping about in a field singing “la la lala la la la! lalala la la la!” with about 40,000 others. Not an experience to be forgotten.”

There was just one song left to play as an encore, and it was of course “Filmstar”. “A lot more ragged than at Ilford, but a great finale. How else could they end this gig but with a current top ten single!!? (Even if it is down to 35 this week.)”

So I made my way out with the throng and began to wend my weary way home. “I’m not quite sure exactly how I made it back to the train station, there were a lot of dodgy twists and turns and streets I did not recognise. Reading could have been a foreign country really. I can’t say I was particularly taken by the place. I caught the 00:08 to London, which stopped at about eleven places along the way, so we did not get there til after one. Paddington’s taxi rank was not surprisingly deserted, so I began walking vaguely homewards and captured a taxi along Edgware Road. Home! At five to two! And utterly exhausted.”

Although Suede had put on a truly stellar performance, my distance from the band had prevented the night from being as brilliant as it might have been, and together with the uninspiring line-up that preceded Suede, and my near-death experience in the mosh, it had ended up a tad disappointing. However, “it could not fail to move me. On Sunday night when Radio 1 played most of the set it seemed monumental. I was moved to tears then, if not on Friday.”

But before this chance to relive Suede’s set came along on Sunday, there was Saturday to contend with: my second day at Reading, for my sixth Manic Street Preachers gig.