A hot and sweaty celebration of Suede in the 21st century.

My love for Suede has been a complicated thing over the years. For many years, I suffered from what I called the Curse of Suede: every time I booked to see them live, something came up to stop me going to the gig, from illness to friends in crisis to unexpected travel (and, erm, one time deciding I’d rather go out and see the new Harry Potter film instead). This all came to a crashing halt in 2016 when I saw them at the joyously bonkers Butlins festival Rockaway Beach (gig no.130, patient reader!) which left me tremendously impatient to see them again as soon as possible. However, in a stroke of bad timing, it turned out that that would be their last UK gig for the next few years as they holed themselves away to record their next album.

And then, on announcing their new album and tour in May this year, they adopted one of the increasingly popular and increasingly annoying gig ID policies, making it impossible to sell any gig tickets you are unable to use, even at less than face value. This pissed me off sufficiently that my excitement at the new Suede era was massively dimmed. Eventually, a concession was made for fans to sell unwanted tickets through Twickets, so I felt confident enough to buy a ticket for one of their upcoming Hammersmith Apollo shows, and started to feel excited at the new album again.

Still, it came as something of a surprise to find out that “The Blue Hour” is, after three listens, definitely one of my favourite albums of the year and could possibly become my favourite Suede album. It’s overblown and pretentious for sure – but with such timelessly great tunes as these, its tendency towards preposterous pomposity turns into something unfathomably joyous and beautiful. Listening to the album as I hurtled up the Northern Line towards Rough Trade East, I felt a glimmer of the untouchable excitement I felt in the 90s, when it seemed like my favourite bands were spinning history with their songs. 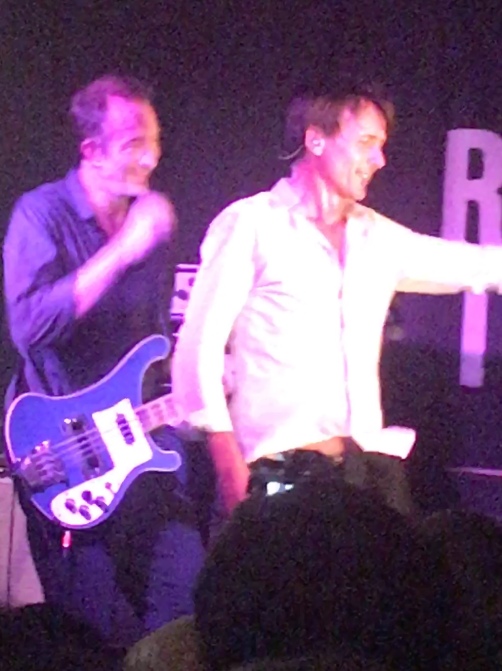 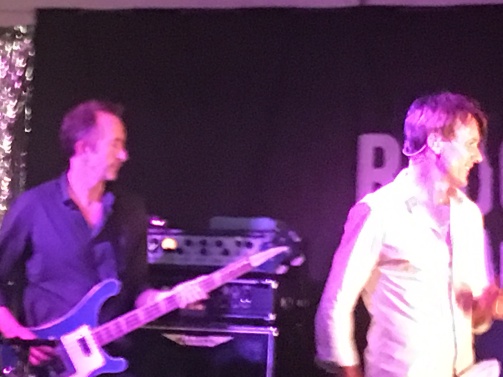 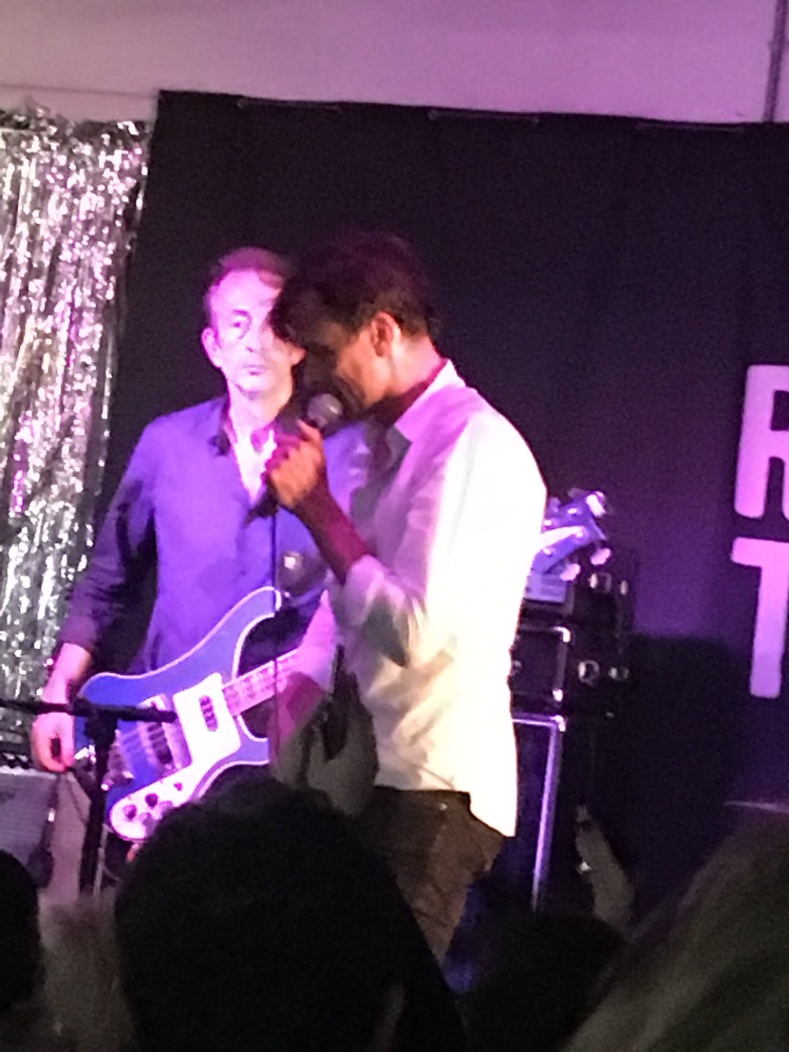 It was a muggy early autumn evening in London and the atmosphere in Rough Trade was hot, sweaty and to be frank, somewhat smelly. I perched myself in front of a pillar and clung precariously to a rack of CDs, and from this vantage point I watched Suede storm through a staggeringly confident set comprised only of songs from their most recent three albums.

I will admit to not having paid as much attention as I should to “Bloodsports” and “Night Thoughts”, and with “The Blue Hour” less than a day old, that meant that I was not overly familiar with the majority of the setlist, beyond the odd chorus, such as the sneakily catchy “It Starts And Ends With you” from “Bloodsports”, or the the stridently joyous “Outsiders” from “Night Thoughts”. But it was songs from “The Blue Hour” that truly shone. Opening with the ominous sweep of electronic strings and chants of “As One”, which also opens the album, Brett took the stage to an oddly muted applause to sing its defiantly mournful and spooky tune. “Cold Hands”, which was the third song in, had rapidly become a favourite during the day as I listened to the album on Spotify. It’s a startlingly resounding glam rock stomper and the closest thing this album has to the trashy anthems of old, and came across brilliantly live, Brett hollering “put your cold hands on me!” while Neil provided high pitched “ooh ooh!” backing vocals. 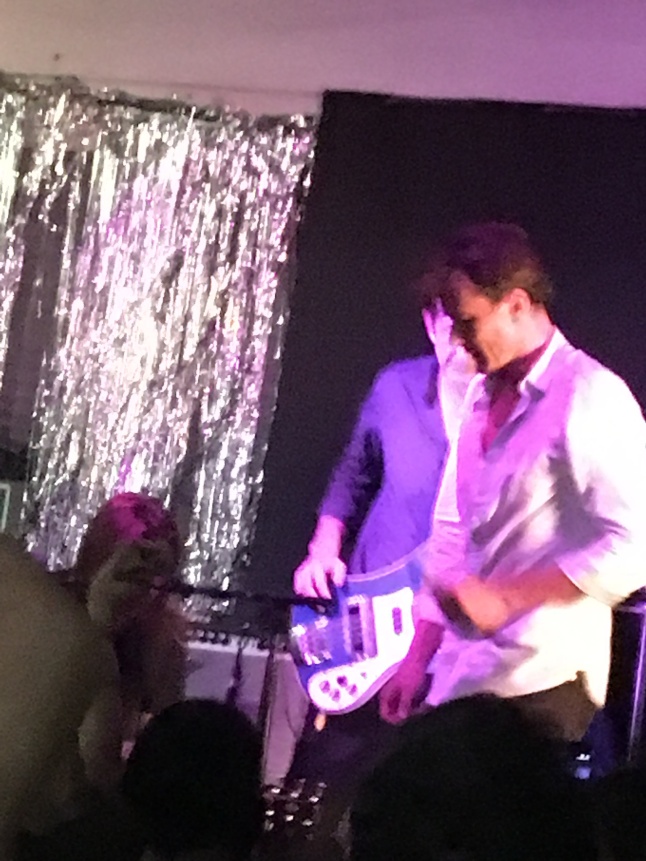 Brett, it has to be said, is a thing of joy and wonder to behold live. Out of all of my favourite bands from the 90s who have made the trek through to this bizarre and weary decade, only Suede remain completely unchanged in the energy and conviction of their live performance, and it’s most of all Brett who embodies this seeming immortality. In positively mesmerising vocal form, he danced a succession of spindly-limbed dances and leapt time and time again into the arms of the front row of the crowd, seemingly unperturbed by the quite frank groping of his torso (and occasionally bottom) that ensued. (I must confess that I did not refrain from the odd bit of torso groping myself when down the front at their Butlins gig two years ago). I could not help boggling in awe at this miraculous man and think, christ, he’s nearly 51 years old. I want whatever he’s on.

To close their set the band performed two new songs that have already claimed their places amongst the pantheon of Suede classics. “The Invisibles” is a song that didn’t fully click for me until I heard it in the context of the album, where it became a perfect shining slice of melancholy, and live, it was a tour de force of Brett’s unreachable emotive power. And the closing “Life Is Golden” was a showstopping, arms-in-the-air, holler-along-because-your-life-depends-on-it kind of tune. “You’re not alone!” promised Brett to the faithful throng, and for three minutes, it really felt true, and it was glorious.

Escaping from the claustrophobic crush that developed as fans attempted to form a queue for the signing, I left Rough Trade East feeling jubilant. I’ll be seeing them again in just a few weeks at Hammersmith, and I am equally excited to hear the new songs again and the classics from my youth. Suede have, for me, not been in such dazzling form since the heady days of “Coming Up”, and I intend make up for all the gigs I’ve missed in past years by revelling in this glorious new, blue Suede era as much as I possibly can.