I felt a little bit apprehensive coming to this show, as I had no idea what to expect. This was not your average Manics headlining show, but part of an ostensibly co-headlining gig with Blossoms and George Ezra to celebrate the 10th birthday of Absolute Radio. It’s not a station I listen to, and if anything, this evening showed me why.

It started off well enough. Blossoms were first on, and were entirely pleasant. I found myself watching a good chunk of their set from the bar, which was either woefully understaffed or encountering technical difficulties, as countless punters waited twenty or more minutes to be served. Once wine had been procured, I found a space towards the back of the downstairs throng from where I could enjoy the remainder of their competently tuneful synth-guitar pop. Once they’d departed, I weaved my way forward to find a spot about half way towards the front of the crowd.

And then, there was George Ezra.

Look, I didn’t start this blog to be a music critic. I only wanted to share my love and joy of music, and especially the thrills of the many gigs I’ve experienced over the years. And plenty of people in the crowd that night seemed to be experiencing just such joy at this young croonstrel’s tunes. So who am I to say that he’s everything that’s wrong with pop music today?

But… George Ezra is everything that’s wrong with pop music today. It’s not his fault – he is definitely talented and possesses a nice voice. But how is it that such blandness fills out arenas? How is it that his singles and albums rocket to the top of the charts? The insipid, boring nothingness of everything about him, from his melodies to his lyrics to the excruciatingly, self-importantly dull anecdotes he relayed between songs, was so overpowering as to become offensive. When it comes to the blander end of commercial pop, at least Ed Sheeran has a sense of humour. At least Adele has a stirring sense of melody and a personality full of warmth and wit. Ezra is a complete vacuum – nothing to say and no personality with which to say it. When there is so much amazing pop out today that is being ignored by the record buying / streaming public, the mere fact of his massive success makes me very angry indeed.

So when he was finally done and “Welcome To The Jungle” blasted over the speakers, the relief was overwhelming. I scooted forwards to find a spot about three rows from the barrier Nicky-side, and very, very happy that the searing brilliance of the Manics would soon drive away the echoes of tedium that had invaded the venue.

And the Manics were, of course, brilliant. They blasted through a selection of their classics with verve and gusto. And who am I to complain that they only played 11 songs when the tickets were only £13.50? Plus I had an excellent view of Nicky, looking beautiful in sunglasses and some glorious silver trews. How does that man just keep getting prettier with each passing year?

And yet, given it was their last gig of the year, there was no sense of it being a triumphant finale. Despite the crowd being dotted with feather boas, glittery faces and the odd tiara (I myself had donned a leopard print manicure for the occasion), it really felt like the boys viewed this as a gig for the vaguely interested masses and not the obsessive faithful. And with only 11 songs, why oh why did one of them have to be a Cure cover? 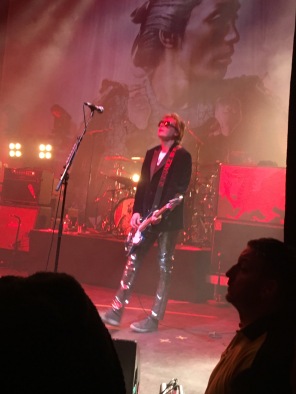 Still, there were, as always, wonderful moments. “If You Tolerate This Your Children Will Be Next” was as icily chilling as ever, full of all the resonance of the 20 years that have passed since I first heard it live. “People Give In” and “Hold Me Like A Heaven” proved that they are capable of creating just as eternally classic songs now as they ever were. And “A Design For Life” was a rousing, arms-in-the-air finale – though after less than an hour on stage it did not feel quite so deserved as usual.

It feels churlish to complain, when this was a ridiculously cheap gig held to celebrate the birthday of a radio station I don’t even listen to – by rights I probably shouldn’t have been there. But any chance to see the Manics is one to cherish, and I’m still glad I went. What we got of the Manics was still a great gig – it just won’t go down in my memory as one of the absolute best.